How Does Google+ Stack Up? – A Pictorial Tour

It’s just ten days since Google+ became a reality (by invitation only still) and in that time it has doubled in numbers (though there is no way to know the initial uptake) and created a wow phenomenon in the blogosphere.

I have been lucky enough to have been invited thanks to the generosity of a friend. Bearing in mind that it is still in Beta and still under development the pictorial tour is there to give you a flavour of what it looks like and what it can do.

First, there is the new Google+ menu bar which features your name on it. Click on that and you get taken straight to Google+. 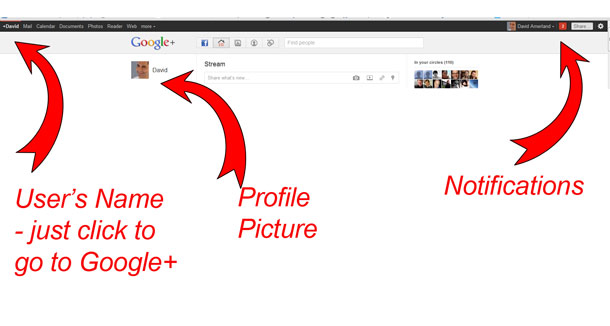 Then there is the Stream. Essentially this looks very much like a Facebook Wall. Google uses an algorithm to gauge the closeness of the people you interact with and prioritise what it shows on your stream. Those you interact with frequently will feature more prominently and you will see more of their posts and they will see more of yours. Relevancy and engagement are still the buzzwords of the moment and Google+ is going to refine them further. 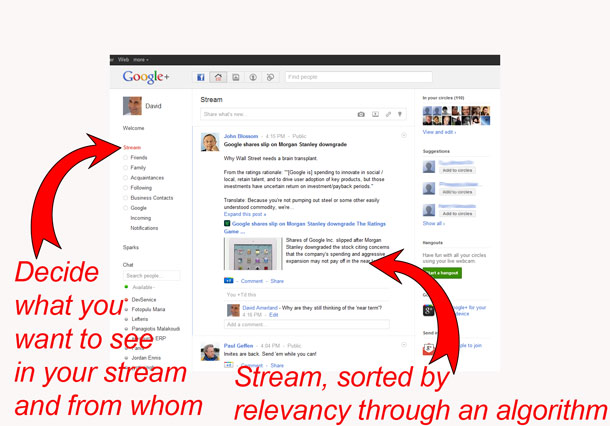 Unlike Facebook you can with a single click decide what you want to see on your Stream and from which group (called Circle).

Circles is the biggest weapon Google+ has. With the ability to simply drag-and-drop  from contacts to any group and complete control over who sees what and when this is the ultimate in social network flexibility.

As with Facebook there are Notifications which appear on the top right. You can choose to expand them and view them and (big advantage) you can choose which to mute and which not to. In Facebook, for instance, I was sick to death of being tagged in a stupid surrealist painting of some description and then have a hundred notifications flood my inbox as friends of friends of friends commented on the picture. With Google+ there is none of that. Feel free to make a comment on any post you like and the moment it begins to gain in popularity and you find the notifications irksome simply mute them for that particular post and go about your business.

The advantages offered by Google+ do not stop there. There is the built-in ability to chat or have a video chat either on a one-to-one basis or as a group (they call this Hangouts). While Facebook made much of their ‘awesome’ announcement earlier this week which comprised of functionality they had added almost half a year ago plus the ported capability added by Skype video, Google+ offered this as standard and topped it by making everything feel smooth, stable and ultra-slick.

Right now Google+, in Beta, is being trialled by ever increasing numbers and refinements are being made., but even at this early stage it feel s like the kind of functionality we are beginning to wonder how we managed to live without. Add it to the fact that Google allows you to  link up Twitter and Picasa, integrate the Google +1 Button and is transparent to Google search and you begin to see that it is going to shake up the social media marketing world in ways which right now we cannot even imagine.

Anyone who wants an invite to try it out email with your Gmail address and I will send you one.