As an author I get hundreds of emails each week telling me how useful one of my books has been, making suggestions for titles or content and asking questions.

Success stories always catch my attention because they are the litmus test by which many of the practical books I write, are judged by.  This one happened to come on a day when I was swamped with requests for articles and the sheer pressure involved in completing the edits for my next book were taking their toll and I was beginning to lose perspective.

It is from Ben who runs his own boiler repair business in South London. This is a cut-throat market where the chances of being ripped-off are high (Consumer watchdog horror stories abound) and where large outfits edge out independent operators who cannot compete in terms of manpower and deep pockets. 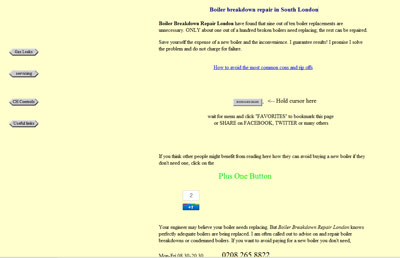 I passionately believe in the ability of the web to level the playing field provided, of course, you understand what needs to be done. I believe that if we lose that ability of the web to provide a means of working which is different in terms of the balance of power to anything which we have had so far, we also miss out on the opportunity to do something truly different and create a world which is ‘new’ and better than what we had for the most part of the 20th century.

Ben’s story captivated me because SEO Help worked for him exactly as I have always hoped it would.

I have upended the case study as it was sent:

“Your book SEO Help must be the best investment one can make for a website owner who wants his site to be found. It is comprehensive, clear, and uses a very applicable step-by-step method to explain things so anyone can use it.

This is how I used your SEO Help book:

The results after less than 2 months:

My front page authority has gone to 49 from about 35.
My whole domain authority has gone to 40 from about 30.
The site is about a year old at the time of writing, mid June 2011.
For the 3 months before I got your SEO HELP, site hits were pretty steady at an estimated 150 per month. That number doubled during the two months that I have been applying what is in SEO HELP.

The last page I uploaded ranked 4th out of 2,200,000 just one week after I made it. ( google: emergency gas leak repairs)

I have identified about a dozen core searches for my business ( I repair boilers/central heating in South London ) and since I started applying what is explained in SEO HELP, not a week has gone by that at least one of them jumped up significantly in Google’s ranking.

In case you are wondering: No, there can be no other reason for the improvements, unless Google's “Panda overhaul” has worked enormously in my favour, and I seriously doubt that.

I can only conclude that the book is perfect apart from the title; David should have called it :” SEO Magic “

This is my site, see for yourself.


Many thanks to David Amerland for his invaluable help."