Bill Slawski Leaves A Vital Gap In The SEO Industry

Like countless others across the world I met Bill before I met him. He reached out to me privately in the early days of Google Plus to gently ask me not to talk too much about latent semantic indexing (LSI) as it was feeding a growing impression that it was the ‘magic bullet’ for those seeking a shortcut in semantic search.

My book Google Semantic Search had just been published and I was busy making the rounds in hangouts, articles and interviews as part of the promotional tour. Somewhere, in one of the conversation threads LSI had popped up and, unaware of how it was being used, I had commented on its usefulness in spotting topic clustering in a bunch of documents that appeared to be unrelated.

I could have blown Bill off. I was busy. The comment was a non-starter anyway. But there was something about his manner that captivated me. He was detailed in his private message to me, explaining the background of which I wasn’t aware and also gently pointing out that the SEO industry, as a whole, could benefit from greater clarity and truth.

Clarity and truth were guiding lights in Bill’s approach to search engine optimization. Trained as a lawyer he put his legal mind to work on Google patents, breaking them down, explaining them and analyzing their potential impact.

We became friends over his initial reaching out and spent quite a lot of time interacting, sometimes on conversation threads on search, sometimes on Hangouts. Occasionally privately. When we met up in 2019, in Milan for the SMXL Conference when I introduced him to a roomful of people he’d never seen before as “the man every search engine optimizer goes to, to better understand the impact of Google patents,” there was applause. He was that well known. 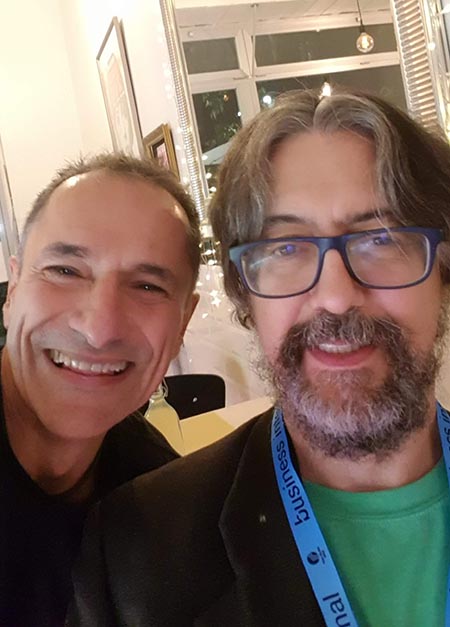 For many across the SEO industry Bill Slawski was a mentor. He used his knowledge to create clarity and spread truth. His personal mission was also his professional one. The lawyer inside the search engine optimizer made the convergence inevitable.

In Milan we shared a panel I moderated. I afterwards listened to his talk on the trend in Google search towards greater convergence towards the indexing of minutiae. Tiny details that added weight to the corroboration of entities. His website, SEObytheSea is a repository of Google patent analysis that any search engine optimiser is not aware of is handicapping themselves.

Inevitably, we ended up in a vegan restaurant. We talked about the past. We both mourned the closure of Google Plus. The future, Google search was evolving faster than any of us could keep up with, we agreed, yet the fundamentals remained the same. Most people got lost in the changes, the technicalities and the updates. They forgot what search was really there for. We talked about politics. Driven by logic and focused on fairness and truth Bill hated Trump. The fact that we were in a world that made Trump President was evidence of deeper, systemic faults with our societies.

I tried to explain Brexit to him. Deep systemic faults are not exclusive to America. The conversation was deep, honest and, given the fact that this was our first physical meeting, real only in the way that people who know each other well online, understand it can be. We broke it off only when the restaurateur gently explained that were like an hour past her usual closing hour.

We were staying in different hotels. We were both flying home, to different countries, the next day so we agreed to meet again, at the next conference. Then Covid happened.

“In the SEO world we take correlation for causation,” Bill said as we parted. “Cause for effect. We need to do better than that.”

I’ve thought about his words often. The SEO industry, like any other, is driven by the need to make money. In the pursuit of that we sometimes forget that not everything is as it appears, nor does everything work exactly as we wish it to be. There is a lot more inherent uncertainty in our industry than most others. The truth we seek in how search works and the validation in some of our practises comes at a price: sharing and cooperation, vulnerability and mistakes. There has to be a certain amount of willingness to cast ego aside and put one’s reputation on the line, for this to work well.

Bill understood this at a deep, personal level. His passing creates an important gap. His voice will be missed. It is up to us to make sure, through our actions, that his legacy remains alive.