There are three things that are evidentially wrong with our world right now: First, across the globe we see a polarization of opinions in people of different political and ideological camps that has widened the gap between dissenting world views. Second, we have the rise of information bubbles that act as echo chambers and amplify biases. Finally, we have an obvious, perceived misinformation problem that unfortunately both arises from and feeds into the first two problems.

This is, still, the age of information. In principle, the flow of information should make us better informed and more likely to want to act together so we can amplify our strengths and achieve our goals faster. But we know this is not how the world we perceive works. What we see is people selectively using information to buttress their views and double-down on their opinions, This is called confirmation bias, in other words, the tendency to look for and selectively accept information that supports our already existing beliefs and views.

Right now, we consider all of these things to be the source of many of the political, societal and even interpersonal problems we experience. Yet, they evolved to help us survive. The fact that they’re not doing so at the moment and, if anything, may be contributing to the speed of our eventual demise owes more to the rate of change of our environment than anything else.

In a timeline that is sufficiently long for humanity to end, the point at which our end as a species occurs depends on our ability to adapt to changes in the environment we live in. For humans, the word ‘environment’ means more than just the weather and the morphology of the location we live in. It also includes such things as the rate of change of our society and its technology.

The problems that the world presents to us today loom large because we are fragmented and isolated even when we live inside information bubbles we share with others who think exactly like us. None of us have the strength to solve them on our own or in our isolated groups and communities. This means that all of us are facing uncertainty and fear.

To be fair uncertainty and fear are always present. But when they spiral out of our control to manage them, as is happening now, we experience a mental and physical reaction that is the result of the body’s “fight or flight” response.

The moment we experience this the body and mind gear up for survival. Cortisol levels[1] go up as the body’s stress response kicks in. Blood vessels narrow. Body temperature and heartbeat become elevated. Our breathing is shortened. The body shuts down the higher executive function[2] we need in order to engage in deeper, analytical thought.

The body does that in order to help us survive of course. By taking vital resources away from what it believes to be unnecessary functions it ensures that the muscles we need to engage have everything they need to work fast and hard. Unfortunately, this is where our neurobiology trips us up. Because it focuses on the perceived threat it robs us of the capacity to take a step back and analyze it so we can better understand its context.

Questions, for instance, that have to do with global warming, mask-wearing during a pandemic, Covid-19 vaccination or political views are processed as a threat because of the current narrative around them that makes them appear to represent one.

Narrative As A Strategy And A Tool

We use narrative as the tool through which we curate who we think we are. We also employ it as the means through which we create meaning out of the disjointed pieces of information we collect from the world around us. As Joe Lao makes abundantly clear in his book “Resistance to Belief Change: Limits of Learning.” The narratives we use to make sense of the world define our actions which, in turn, determine our future.[3]

Narrative then helps us understand our self better. It also helps create, sustain and reinforce our beliefs. At this point the picture looks bleak. It appears we are locked into a self-defeating behavior because we are victims of a mechanism that is supposed to help us better understand who we are and what we must do to survive which no longer functions quite as it should.

Things however, are rarely as bleak as we make them out to be. A better understanding of how we get to be so caught up in our own beliefs and the actions they make possible that we fail to see the wood for the trees, also helps us understand what it is we must do to help our brain to function better. By ‘function better” we basically mean function more fully and be capable of deeper analysis; the competencies we need in order to deal with the complex challenges we are presented with in our time.

Narrative, the very same strategy and tool that often locks us into the polarized behavior of identity politics can also be used to save us.

The Brain Is A Predictive Machine

We only enter into such activity when we encounter situations and scenarios that are no longer supported by our current beliefs. At that point we are forced to rework them in order to enable our brain to once again function as an accurate predictive machine. 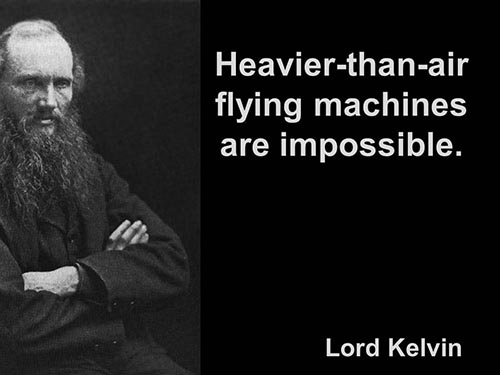 For example, before the Wright Brothers came along and proved otherwise the belief that only lighter-than-air flight was possible stopped many scientists and engineers from even entertaining its opposite as an option. Even the well-known, acclaimed mathematical physicist Lord Kelvin, the an who gave the world the Kelvin scale of temperature declared “heavier-than-air flight is impossible” in 1895. And this despite the fact that the Buoyancy Principle was already well-established so it was just a case of coordinating the four elements of drag, weight, lift and thrust. The way birds do.

After the Wright Brothers proved that heavier-than-air flight was possible, there were numerous breakthroughs that made it possible to begin to build better airplanes.

No one today believes that heavier-than-air flight is impossible, even though they may have no idea of the aerodynamic principles that make it happen. Why did people change their beliefs on this subject so easily? Basically because the prior beliefs they held no longer enabled them to make accurate predictions about the world.

A 2021 study[5] carried out by researchers at Princeton University showed that “Making predictions is an adaptive feature of the cognitive system, as prediction errors are used to adjust the knowledge they stemmed from.” The study used an experiment to test what happens when the predictions that stem from the belief system we hold prove to be different from what we expect.

The focus of the study was in the context of political beliefs and misinformation. The study showed “that the size of prediction errors linearly predicts belief update and that making large errors leads to more belief update” and this held equally across all political ideology.

What does all this mean?

If you’re an individual trying to convince your friends that the Earth is not flat, for instance, debunking their belief with science is not going to work. The same goes for Covid-deniers and those who think that Global Warming is a “Chinese hoax”.

While the facts, in each case, may be unassailable in order to get someone to change their mind we need to do three distinct things:

How To Apply Belief Adjustment In What You Are Doing

Changing a person’s belief system is hard. Until it isn’t. It’s not hard when it makes sense. In order for it to make sense both parties must be willing to enter into a conversation, show equal respect for each other, listen and think.

It’s not as easy as I make it sound. However, the alternatives are much worse. If we can agree on that then the rest becomes easier to manage.

You can be an activist, a political pundit, a marketer, a corporate spokesperson or Joe Public. Here’s what you do: Frame your narrative with care. Remember everyone is a person. No person is automatically better or worse than any other person. Come prepared to actively apply the three distinct things mentioned above.

Keep in mind that people who have polarizing opinions hold untested beliefs. Be kind to yourself. Then extend the same courtesy to others.

Go deeper. Check out Intentional: How to Live, Love, Work and Play Meaningfully