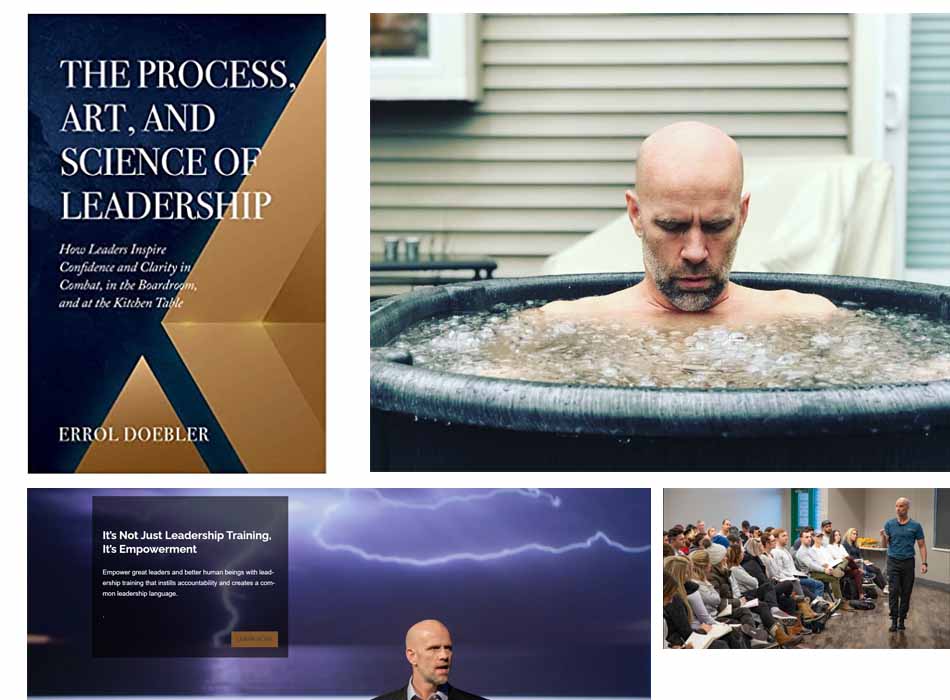 I’ve been sitting on writing a proper review for Errol Doebler’s book for almost a year now. As a book in my Kindle library that I feel the need to get back into again and again it always comes up first whenever I open my Kindle. I bought the book the moment it became available and I finished reading it within a month of having bought it. So, why has it taken me so long to review it?

I will get to it because that’s actually quite revealing.

But let’s start with the basics first. Errol’s titled his book: “The Process, Art, and Science of Leadership: How Leaders Inspire Confidence and Clarity in Combat, in the Boardroom, and at the Kitchen Table” and, as you expect it is indeed full of science as Errol backs up his experiences and his suggestions with studies and research data but the book is also full of anecdotes from Errol’s personal history as a former Navy SEAL commander and former FBI Special Agent.

Errol’s writing style is very similar to the way he talks. He starts off by saying something that is straightforward, he then backs it up carefully and methodically with experiential information and scientific data and helps you understand how it applies to you. Because Errol’s background is so intimidating it is hard, at times, to reconcile the perception of a super-focused, hyper-efficient, uberman that’s the first impression he gives with the person in his book who makes mistakes and only slowly learns to learn from them.

Yet, we all know that all of us start from square one. What makes us who we are is the journey and how we deal with the challenges it throws at us. This is where Errol is amazing. By willing to open up and be vulnerable he becomes the petri dish of his life’s experiment, learning the ropes of what he does by experimenting on himself.

His candor which is always on full display in his blog posts, turns a book that would just be useful into a vital tool for self-improvement, greater focus and better leadership skills. Quite early on Errol makes no bone about the importance emotions play in our motivation and decision making. He turns expectation on its head by showing not how to suppress them in order to be more effective but how to better understand them, embrace them and roll with them in order to become virtually unstoppable.

The reason it’s taken me so long to write this review is because in reading the book I had to reassess my own approach on handling how I felt about things. When you learn, from Errol’s writing, that emotions also have emotions and your reactions to specific situations are governed not just by what you feel but by the way you react to the fact that you feel the way you do, you enter the jungle of the mind where it is hard to make out which path to take and which direction is right. Thankfully Errol is not just a magician pulling back the curtain to reveal the mess that hides behind the construct of the self and the complexity of our decision making, he is also a great guide.

Step-by-step he takes us through the process he uses to cut out distractions, carry out clear situational analysis and understand what he has to do. From chapter to chapter he builds the reader up to the point that things begin to make total sense. As someone who always practises what he preaches Errol explains how he deals with discomfort, fear, uncertainty, failure and doubt. These are the elements that make up the little destructive monologues we hear inside our head.

He shows us how he deals with the cold as he takes ice baths in his garden in the middle of winter. We can’t help but admire and then be inspired by his tenacity as he strips back layer after layer of his own mental defences, living himself bare and out of places to hide. And he then builds his strength and focus up, using methodologies which he teaches in his leadership course.

“The Process, Art, and Science of Leadership: How Leaders Inspire Confidence and Clarity in Combat, in the Boardroom, and at the Kitchen Table” is great to read just as book. It does what every emotionally honest and intellectually principled book does: it takes us into the mind of its writer and shows us the vast, rich and enthralling universe that resides there. But it is an important book to read for another reason. Books on leadership usually go through the usual tropes: they talk about nature vs nurture, go big on discipline and focus, tell you all about goal-orientated behavior and task-specific prioritization skills.

Thing is we all know all of this already. We hope, each time we buy a book on leadership to find the shortcut we need in order to do things better, faster. Errol’s book is refreshingly honest. He gives you five distinct elements that are part of a logical process. He explains how a disciplined, planned approach and a methodical execution help rather than hinder creativity. He explains where ‘blue sky’ thinking fits into the leadership model of a focused warrior. And he does it all practically, in a seemingly simple step-by-step way that says “there is no shortcut” except there is one. A big one.

Errol is not explicit in it but he makes it clear from the start. If you don’t embrace your emotions, fighting them will leave you disoriented, demotivated and too drained to make any meaningful decisions. If you start with the notion that it is OK to feel fear, uncertainty and doubt you can then begin to ascend the ladder Errol’s methodical process has created. Planning is a cerebral activity. It is task-detailed and goal-orientated. Leading however, when it's true, is a feeling. Errol's book shows you how to discover it, nurture it and help it grow. When you do, you will be better at handling your self when under pressure. You will find that difficult decisions are made more easily and faster.

You will, inevitably, be able to lead better. Too few books can truly claim to be able to help you practically so quickly.