Context is a key ingredient of sensemaking. Whether we’re discussing search or talking about marketing, or more simply even, communicating with a friend; without context we are going to lose a lot of time establishing the meaning of what we say. Even more likely, in the case that we do not take the time necessary to establish a common language of understanding between us and whoever we communicate with, be it human or machine, we are unlikely to get as much sense out of the situation as we’d hoped.

Context then acts both like a filter and a funnel. It allows us to sift through all the information contained inside our head and create a distinct boundary that narrows down the available choices of meaning generated by the combination of words and pictures we encounter, to a manageable number of choices that best fit the situation. Substitute the word “index” for “head” and “search interface” for “situation” and you have a pretty accurate idea of how semantic search works. Use “objective reality” and “perception” instead of “index” and “search interface” and that’s your description of marketing. Now, change “perception” to “intersubjective space” and that is your academic definition of branding.

When, in the past, a company could segment its customer base using demographics it was context that enabled it to do so and then ensured that it capitalized on the division by establishing different messages of distinct value to each audience. 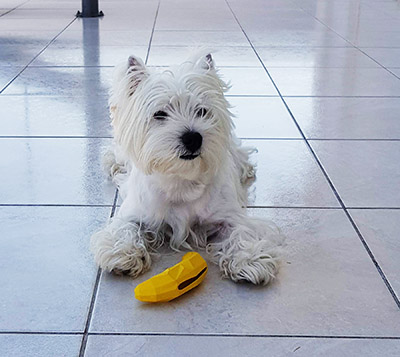 To understand this a little better consider that the interlocutor, whether a person or a brand needs a distinct audience to project an identity. When I am at a party with friends I will crack jokes, laugh at jokes being made and will talk about films, music and my dog, Bennie (pictured left with his favorite toy).

At a conference I will present a particular subject the audience is interested in, outline its importance to the audience needs, explain my expertise on that subject, present my hypothesis in dealing with it and back it up with data. Jokes and Bennie will not come up. In each of these cases my audience and its needs determine the aspect of my identity that I choose to project.

Now imagine if all the audience present at my last public talk in Poland, for instance, was present at the same party with my friends. And imagine if the audience from Poland, despite being at the party, were interested only on my talk in executive decision making while my friends wanted, as usual, to catch up with gossip, and news on films, music and Bennie. That is context collapse.

Context collapse, as a term, was coined by anthropologist Michael Wesch in 2011, who first used it in his talk, An Anthropological Introduction to YouTube.

While initially applied to social media context collapse, in every sphere, has the exact same schema: Tone and presentation determine an aspect of the self which reflects an aspect of identity. To hold true this requires a bounded audience. When the audience is potentially infinite (as in the online setting) then context collapses, projecting an identity becomes impossible because the audience has a virtually infinite number of needs, wants, experiences and expectations. In addition, behavior and data that is intended to provide value and illumination to a limited audience may do the exact opposite to a much broader one that receives it.

How Does Context Collapse Affect Marketing?

Consider this classic and, at the time of writing, topical example: The global spread of the coronavirus created the perfect context collapse scenario. People of every imaginable income and status, nationality and skin color, were reduced to staying at home in a virtually global lockdown, exercising social distancing and waiting it out in order to reduce the rate of transmission of COVID-19.

Italy was hit pretty hard. At times like this small acts of humanity help lift morale which is why the World Health Organization (WHO) Youtube account shared the video of a man playing John Lennon’s “Imagine” on the trumpet on his balcony.

By her own account Hollywood actor Gail Gadot was inspired by this video and enlisted her Hollywood celebrity friends to riff on that: 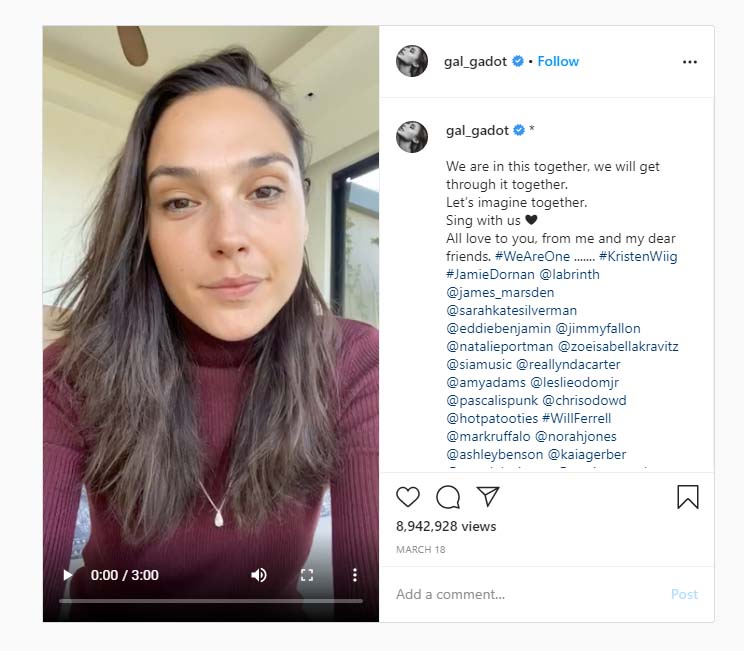 The idea to use a song that asks us to imagine a world “with no possessions” while singing from opulent surroundings and not having to worry about paying bills or losing your job, during a forced lockdown, did not go down well. The New York Times, Esquire and The Guardian all wrote about the drubbing Gadot et al received on social media.

A point further driven home by Madonna’s COVID-19 is "the great equalizer and what's terrible about it is what's great about it," video delivered while the star was having a rose petal and milky bath in a bathroom few people will ever be able to afford.

A 2018 study carried out by researchers from the Stanford School of Business in California and Cambridge University in the United Kingdom, showed how on Facebook context collapse led to a race to the bottom in terms of self-representation and identity curation.

The current examples presented by Madonna and Gal Gadot also answer the question marketers ask: How do we market in a world where your audience, potentially, is everybody?

Be yourself. Have values. Have concerns. Make it about them (as in your audience) as opposed to about you. Gail Gadot and Madonna meant well. But they were using the occasion to lift their own spirits rather than everyone else’s whereas the unknown Italian musician expressed himself for the consumption of his audience (otherwise he could have played his trumpet inside his own home).

If your values and concerns truly reflect your audience’s then you have alignment. Marketing, in that context, is easier. You present the solution to a perceived problem and help those who need assistance do something they need to do.

How Does Context Collapse Affect Search?

Since my very first book on search I’ve been talking about context and how it determines when your content will surface in response to a search query. That means you really need to write content not to promote your business but to satisfy as deeply as possible the needs of your audience for information.

Again this is about them not you. In that sense your identity needs to be clearly defined and your values need to be worked out. Since context determines our perceived identity by defining the aspects of it that are relevant to any given situation you need to make sure that your content adequately reflects who you are.

In addition, as I detail in SEO Help your identity and values must also be apparent in the design, look and feel of your website, your emails, your advertising and your promotional materials.

The three golden rules you need to know right now are:

In the immortal words of Oscar Wilde: “Be yourself; everyone else is already taken.”

From the very beginning of semantic search we’ve stressed how companies need to act more like people and people a little bit like companies. In plain speak this means be real, be authentic but also be professional. Oversharing in the age of context collapse is not something you really want to do. So companies be more human and open and people be a little more cautious and reserved.

There. Not easy, I know. But then, if we are truly being ourselves, not that hard to do either.