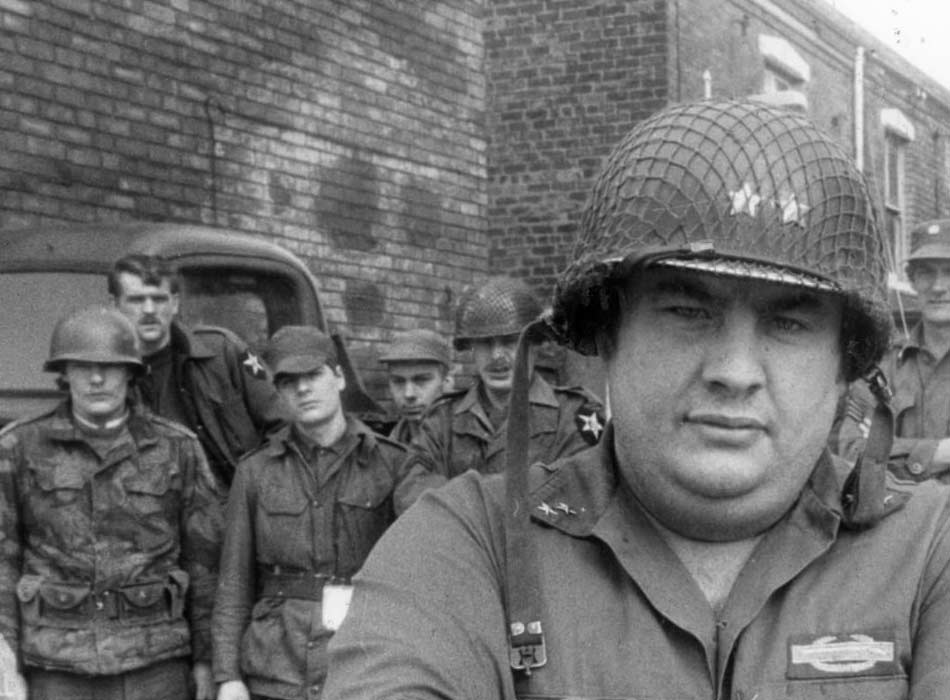 The row of orderly English houses had been demolished, but it hadn’t been abandoned. A couple of Union Jack flags still flew over the rubble. The silhouette of a G.I., rifle slang over his shoulder as he stood guard could be seen in one corner. A portly two star major general, Tommy gun in hand was standing at the front of all this, a jovial smile hanging on his lips and a look of defiance marking his mien, talking to some reporters. The weapons, just like the uniforms were fake. The rage that drove this tableau, plucking it from the realm of fantasy and transporting it into the reality of 20th Century English local politics, was all too real.

Incredibly enough this was 1986. The U.S. major-general was actually English and went by the name of Barry Nuttall and he was the self-proclaimed leader of the Northern Allied Axis Society, the defending army in the drawn out and remorseless, by some accounts, siege of Wyndham Street. Despite its grandiose name it was a homemade struggle against a demolition order issued by the local council in Hull as it tried hard to revitalize moribund areas of the city.

One hundred and thirty seven miles and 32 years away another reporter is busy talking to some Flat Earthers about their beliefs (and yeah, that sounds as weird as you think it does). He too is trying to understand how something as seemingly bizarre as the Flat Earth Conference and its premise is possible to exist in the 21st century.

On the surface of it the two events have nothing in common yet as the two articles draw up a pattern of behavior linking up conspiracy theorists, the Brexit vote and (maybe) even some Trump supporters what becomes abundantly clear is that we live in an age where information is free but while it is easily accessible, fairly portable and empowering, it manages to present us with a new dilemma that emerges from its very form.

Namely its provenance. Information may hold power in itself because it has value but there is a duality to it that derives from semantics. Where it came from, how it came about and who released it (or who was responsible for its creation) are also relevant elements in its schema and they, by association, have the ability to add to or detract from its value. A piece of news that comes from an eyewitness account may, perhaps, hold more value than a slightly broader report filed by a newspaper but that’s only as long as we don’t dwell into the skills of observation, trustworthiness and maybe, even, motives of the eyewitness.

Official sources have structure. In structure we have encoded intent in a way that makes it difficult to subvert. Consider, for instance, that in order for a newspaper to put out a false account you need the editor, reporters and owners to be OK with. More than that, you need a host of different people with different skillsets, purpose, motivation and intent to align over this one account and falsify it. It can happen, but it is unlikely because it is difficult to see that they’d each gain more than they’d lose. Plus the newspaper, as a whole, would have to align with this falsehood as a business.

Pravda did it, turning news reporting into propaganda but by then its gain as a whole was obvious and so was everyone’s who was associated with it and its credibility suffered as a result.

The Power Struggle Between Power and Knowledge

Michel Foucault in his study of the struggle between power and knowledge makes the same point in a far more analytical, detail-driven way. In his analysis he picks out six points common to all struggles against authority which, like a litmus test, also unite the siege of Wyndham Street with Flat Earthers:

By regarding the conception of freedom of the individual as an ontological condition of possibility Michel Foucault revealed the semantic value of the individual as well as that of the knowledge he possesses. We live in a world of interconnected values and possibilities where we become nodes and the content we produce, share and consume play becomes edges in a relational database collectively called the Knowledge Graph.

From Strings To Things

And so, in such an apparently easy way, we’ve gone from concepts to actions and “strings to things” what really matters and makes things happen is human behavior and motivation. And the dynamic is the same whether you’re a brand or a person.

The Medium Is the Message

Marshall McLuhan’s work on communication and the ability of the medium to transform the perception of the value of the message, enshrined in his The Medium Is The Message is now more relevant than ever before. How we define who we are is key to what we decide to do.

The Takeaways (or TL;DR)

We’re in a world where the value of information is being questioned because of its alignment with tradition. The medium cannot be divorced from the message and a medium that is misaligned with the needs, understanding and values of those it shares its message with will find itself being attacked through a direct rejection of its message.

People are rebelling against tradition. Power (in all its forms) is undergoing a transformation and a redistribution. To want to rage against the ‘machine’, to stick it to the man, is a natural human reaction to the perception of powerlessness, helplessness and, maybe, injustice inherent in the human condition.

We need to rethink not just how we create value in what we do but also what we value and why.

All of this affects everything: marketing and branding, search and communication, content creation and social sharing, beliefs and identity, behavior and actions, purpose and intent.