Every business understands the value in branding, but few get the values of branding. In presentations I’ve often discussed how branding now cannot be separated from other business considerations like search, content creation, a social media presence and the core values that make a business what it is.

The trail that links up all these figurative dots into one cohesive picture starts with the myth of the brand and the business behind it. A myth is nothing more than a fabrication, a mental invention that represents an abstract concept which reflects a belief system. Whether we talk about the Pantheon of the twelve Olympian gods or the latest advert by Nike, the sports company the result is the same. Neither of these two really exist. “Nike” is not the buildings used to house its staff. We can destroy them and the company will still exist. It is not the famous swoosh logo or even the merchandise it sells. We can change the logo and get the company to manufacture bicycles instead and it will still be “Nike”.  It certainly is not its CEO, founder or staff. We can replace all of those with none being the wiser at the customer end.

What makes “Nike” what it is, is our collective acceptance of a number of distinct, widely acknowledged attributes that we accept as being “true”. Taken together all of these constitute an entity that has a conceptual existence indistinguishable from that of Zeus, Apollo, Aphrodite or any other Olympian god. What is even more interesting is that the Olympian gods have about as much conceptual reality for us, right now, as “Nike” the sports shoes company would have for the Ancient Greeks if we could go back in time and explained it to them.

Though neither “Nike” nor the Olympian gods have an objective existence each person in their timeline can observe their effect and vouch for them being real. We know that “Nike” has to exist because we buy goods it manufactures, consume ads it produces and believe in values it says it holds. Similarly, for the Ancient Greeks, the Olympian gods made the Earth tremble, the crops grow, the sun rise and set and controlled the fate of man.

“Nike” and the Olympian gods then are both just as ‘real’, and though they reside at opposite ends of the spectrum that position is relative to the point of view of the person looking at them. They are both real from their perspective because their existence is found in the inter-subjective space of our communication networks. The things we say, write and think based upon what we believe.

There are millions of people all over the world, for instance, who have a shared, commonly understood notion of “Nike”. Because of that they act and behave in ways that have real-world impact: games are played, shoes are bought, values are adopted, billboard space is sold, notions are developed, aspirations are formed and money changes hands, because of what the sports company stands for. The Ancient Greeks sacrificed animals, built temples, formed sects, created philosophies, structured communities, named cities, and ordered their lives around their understanding of the Olympian gods.

From Strings to Things

The difference between something imaginary that has zero value and a shared notion that gets people galvanized and motivated lies in the size of the area it occupies in the inter-subjective space. Inter-subjective is a term applied to the Venn diagram between the objective and the subjective. The overlap between the two is the area where things seep in from the realm of the imaginary into the world of the real. 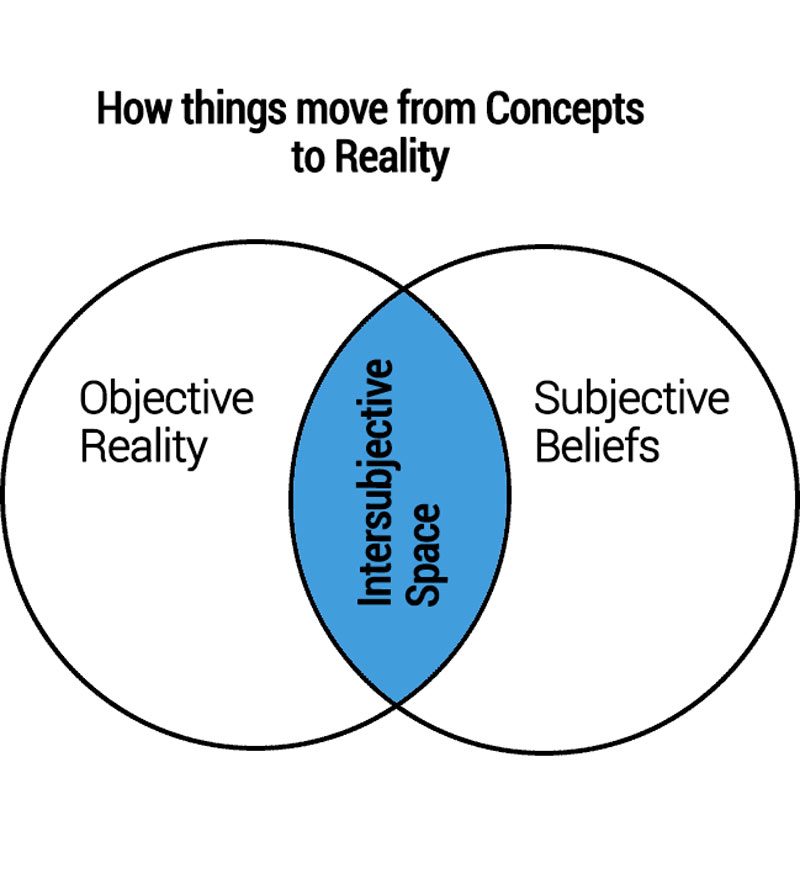 For the millions of people around the world, Nike is something real. They make choices in their lives that lead to real actions, because of it. For all of Ancient Greece the Olympian gods were very real. Entire real-world policies were formulated around their dictates, likes and dislikes.

This is no different to Google’s semantic search transition from “strings to things”. The shift of entities from an abstract, mathematical modelling space to a database of facts where verified entities are catalogued and classified in a structured way that makes even more sense.

This is where branding comes in. Because branding stands for values that are based on facts and the brand’s identity it can no longer be defined by, let’s say, a logo, or an ad or a very tall building. In search, alone, you need a full set of attributes before you even become recognized as an entity. But where the proverbial petal really hits the metal is the point at which a purchase decision is made by a customer.

The journey that leads to that purchase decision begins much earlier than the point of sale and it requires three distinct elements that allow a potential customer to extend trust in a brand and make a purchase:

"Familiarity with the brand requires some experience of it (via advertising, word of mouth, internet publicity), Confidence comes with the perception of competence in the brand itself (which is why new brands really need to work hard for people to experience them first) and Trustworthiness refers to the sense of whether the brand is going to live up to its promise of reliability for the price paid."

Excerpt from: The Tribe That Discovered Trust

What branding does then is take the concept that is a business from the subjective space where there is no control whatsoever on the perception that is being formed about it and the way it is evaluated by its potential audience and transfer it to the inter-subjective space, where people from all walks of life and widely different national backgrounds, can actually attest to a brand’s identity and values and even feel united by the commonality of their perception.

Brands that succeed in achieving that kind of impact have, usually, done a lot of work in creating content that works across many different layers, helping to form a complex picture of who they are, what they stand for, what they really want to do and what excites them. Those who still think a little harder advertising is all that’s required in the 21st century, are looking at a countdown clock and not recognizing it.