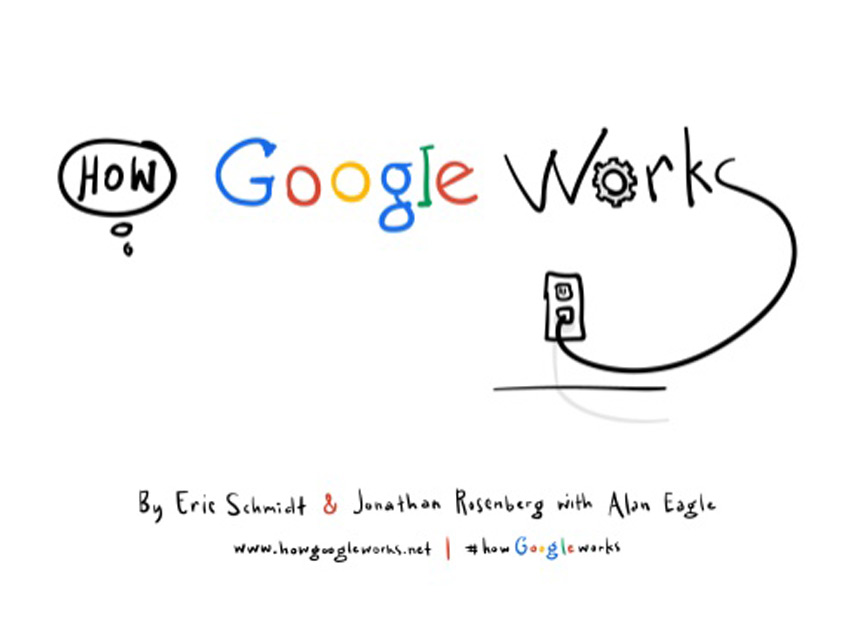 Without really articulating it in detail our entire life journey, at a cognitive level, is a struggle to understand how the world works. In a sense the way we do this also determines our station in life, career path, identity and even impact we have in the world. The reason for this is data: who has it and who can get access to it, has always determined status, power, earning capacity and effectiveness.

None of this is mentioned in Eric Schmidt’s and Jonathan Rosenberg’s book but all of these are important because they are intimated in a book that talks about empowerment, disruption, innovation and the importance data plays in a world where getting and sharing it is becoming both cheaper and ubiquitous.

This is not a book which reveals how Google works in its everyday structure or details and it has a sometimes breathless, upbeat tone that reads almost like a PR exercise for the company. As you’d expect from a serving Chairman, Schmidt is never critical of anything unless it is there to make a point on how far he, a 20th century man, has come in his thinking thanks to the empowering, innovative, disruptive environment of the world’s leading search company.

As you’d expect the words disruption, innovation, empowerment and data are the book’s most often repeated words with hardly a paragraph going by without one or the other appearing in it. Schmidt and Rosenberg do a great job painting a broad picture of how Google tries to disrupt itself and there are moments in the book like when Schmidt and Rosenberg describe the process for deciding which project is priority which are pure gold. There is no denying the fact that Google is a unique company with a singularly unique culture even amongst the Silicon Valley free-spirited environment and any intimation of how this is achieved is excellent.

There are moments in the book when the jovial tone slips a little. When its authors describe how, following the closing of Facebook’s walled garden and Twitter refusing to renew an agreement left Google out in the cold in the social web, the tone gets grittier, the lessons of a company determined to “never depend on others again” for social data, steelier. This is a company that’s forging new ground, one whose voracious appetite for data places it at odds with companies, governments and even nations.

By insisting that data should be what drives decisions forward (and not the other way around) Google has succeeded in democratizing power (to some extend), empowering the individual and disrupting almost every traditional industry that depended on creating bottlenecks to the flow of data. This includes newspapers and traditional media companies and countries and their governments.

What the book makes abundantly clear is that when it comes to doing things differently Google actually tires harder than any other company. Its culture of being able to just do things is what makes it the ideal breeding ground for ideas that can change the world.

This is a book that, with few exceptions, provides a 30,000ft look of Google when perhaps one would expect the view to be from inside looking out. Schmidt and Rosenberg are good at creating broad descriptions. Their language is down to Earth and the fact that this book even exists is indicative of Google’s efforts to be as transparent as possible.

There are precious few business lessons one will take away from this however beyond the fact that it’s best to get the product out at a “good enough” stage and then work endlessly to perfect it based on data rather than wait forever to make it perfect and then never really get to ship it.

Those familiar with the perpetual beta culture of Google products will hardly be surprised by this. Google fans will love the upbeat, jovial tone. Google critics will be sorely tempted to write it off as a PR document that hardly lifts the veil on what some think is now the world’s most powerful company.

Should you read it? I would say yes. If nothing more it will clarify for you the importance of creating a culture of “smart creatives” in your business who can bring about its evolution. It is on that note that the book manages to strike a real chord. Business is never static. Neither is the world. Those who think it is are forever doomed to fighting a losing, damaging rear-guard action. Those who understand that change is inevitable are nimble, adaptive, intelligent and, ultimately, disruptive.

Because of these no business can hope to last forever unless it is prepared to morph even to the point that it evolves its old self out of existence. The book actually ends on just that note and in the 21st century that is the best lesson to take away and remember and Google, just by being what it is, has made a lot of change not just possible but also inevitable.

How Google Works can be bought from Amazon.