Want To Catch Your Audience’s Attention? Act Like a Filmmaker 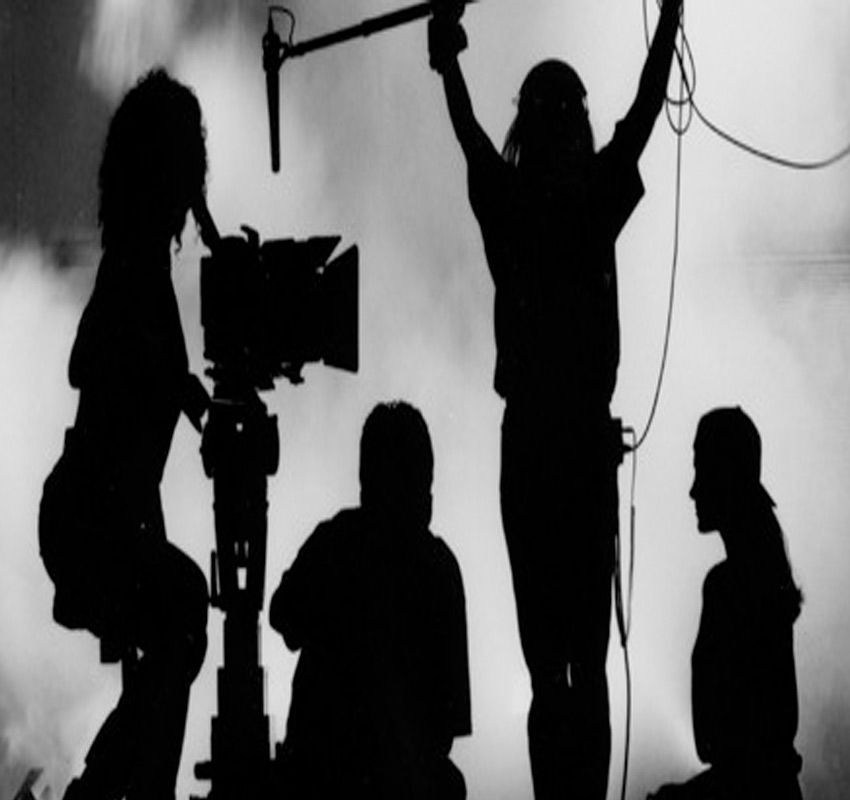 We live in an attention economy. If you do not successfully capture the attention of your audience you have no chance of making your message heard. Your brand values will not reach those you intend. Whatever you do will then devolve into just so much noise, lost against a background of ever more noise that is flailing to become a signal.

If this description describes what you intuitively know, don’t despair, there is a solution. To best illustrate it I’ll use examples from both the world of brand advertising and cinema, but ultimately the success of both come down to the same thing: successfully capturing the attention of your audience.

We need to start with the fact that your brand is not a single item of content that can be consumed in one go or a single consumable that can be bought in one instant. It is a narrative that is best presented in a narrative construct over a long period of time. Those who rail against “The MTV Generation” for shortened attention spans and lifestyles full of distraction are suggesting that there are extrinsic factors to changing audience attention spans that are somehow ‘ruining’ the quality of the target audience and are making marketing more difficult.

In fact, a century of film data that maps the length of camera shots in film shows a declining trend that has nothing to do with the advent of MTV, video or the internet. This suggests that short attention spans are intrinsic and therefore, the norm. We are designed, by nature, to fragment our attention to everything that surrounds us and absorb messages on the fly. Our brains are designed to strain out the message from the ‘fragments’ we give our attention to and create a narrative. 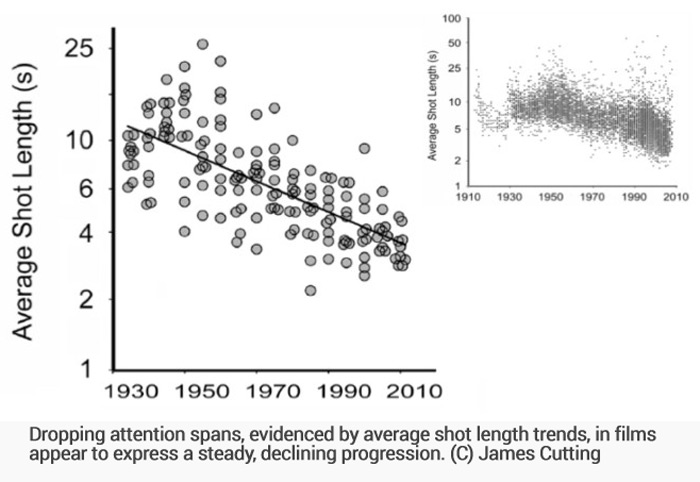 Cornell University psychologist James Cutting, who’s been studying the evolution of cinema, suggested in a 2010 paper titled “Attention and the Evolution of the Hollywood Film” (link in the sources below) that this was due to advances in technology and the introduction of plot complexities, rather than audience ‘failings’(the intrinsic factor, again, making itself felt as opportunity presented itself).

This is an important point because in a marketing sense everything you do as a brand or a business, creates a sequence of event points in the mind of your target audience that act as narrative builders, much the same way that film shots are compiled to create a plot narrative.

Understanding how the brain of your audience works to perceive your message is critical to its success. Making this exact point in a Wired article that cites Cutting’s work, Greg Miller shows how the modern tendency in films to show more action by having shorter shots and more motion in their films can backfire in what is now known as “The Cloverfield Effect” named after the 2008 film Cloverfield whose jerky camerawork nauseated some audiences.

Narrative Has a Rhythm

What the analysis of 100 years of film data shows is that narrative has a rhythm that resonates with the audience’s inherent ability to decode it in their brains. The most satisfying films (and by association, marketing messages) are the ones that tread the incredibly fine line between the technical language of film and the narrative structure of each shot to provide as “data dense” a message as possible.

One person who has turned his intimate understanding of that into a globally successful career is Jackie Chan. Listen to this nine minute video on why his films are better received by an international audience despite the fact that they seem to be, mostly, in the niche interest of “action comedy”.

Narrative Helps The Audience Construct Its Own Identity

From a psychological point of view identity is an ever evolving narrative that changes with us and yet retains a sufficient part of its core to allow us, each morning, to know who we are and why we are on this planet, as we wake up.

Heineken, in a study of brand marketing that included detailed interviews of 9,000 consumers came up with two distinct consumer groups in the social media age that it segregates its audience into. One that wants to live thoughtfully “…and they seek out brands that emphasize trust, honesty, and transparency.” And one that wants to live in a legendary way and “They’re after the experience.”

Despite the apparently massive chasm separating these two groups they’re actually united by the same intent: deriving meaning from their lives. That meaning can only come about when the marketing messages, just like the shots of a film, assemble themselves in the audience mind into a whole that actually makes sense to them at a personal level (which is what information retrieval via semantic search is about).

The greater the degree of sensemaking in the construct they create, the greater the value the film (or the marketing message) has at a personal level, the more memorable everything becomes and it is then that it begins to command a large slice of audience attention.

Our brain, it seems, constantly acts like a semantic machine chunking up information and like Google’s predictive search “…cuts your visual stream of consciousness right before your eyes jump and joins it to what comes right after.” Just like the marketing message that we synthesize around a brand “The movie playing in your mind’s eye may feel smooth and continuous, but that’s an illusion manufactured by your brain.”

How To Apply This In Your Marketing

In Chapter 6 of Google Semantic Search talking about how Content Became Marketing I wrote that:

In the age of semantic search content has become the transactional currency used to unleash real value on the Web. When everything revolves around its existence traditional businesses are forced to become publishers and broadcasters, individuals need to become writers and photographers, and brands have to become more person-able and direct.

It now appears that we also have to think (and act) like cinematographers. As the web becomes more crowded and more visual, marketing messages need to be interspersed between short attention span shots:

And longer ones that allow your audience to gain some respite:

All of these will need to be guided by your brand values, your mission statement and your brand identity.

Success lies in a deceptively simple formula that allows you to project all of these in a trustworthy, honest and transparent way while, at the same time, aligning your core values with those of your audience in a way that helps them construct who they are.

Then you will have their attention.